Her Story Inspired Ours

Aubrey Michelle (Fadule) Pappas was born in Fremont, California, and was raised in Marlton, NJ, where she grew up in a loving home with her parents, Alida and Joe and brother Joey. As a member of the field hockey and softball teams at Cherokee High School, Aubrey made many friendships that lasted throughout the years. In 2001, Aubrey graduated Magna cum Laude, from LaSalle University, where she earned her Bachelors’ degree in communications. Shortly after graduating college, Aubrey moved to North Brunswick, NJ and was hired as a 6th grade language arts teacher at Linwood Middle School where she worked for 13 years. During her tenure at Linwood, Aubrey developed wonderful friendships with her coworkers, especially her ‘Linwood Ladies’, and put her heart and soul into teaching and getting to know her students. Aubrey not only impacted the lives of her students due to her caring and nurturing personality, but also she had a tremendous impact on her family and friends. Aubrey was a selfless person who showed unconditional love and support for the people she loved.

In January 2006, Aubrey met the love of her life, Officer Paul A. Pappas Jr., a lifelong resident of North Brunswick Township. The two found an immediate connection through fitness, food, travel and sports. They wed in 2009 and bought their dream home in Monroe, NJ in 2010, where they always welcomed and entertained their large families and many friends. Aubrey and Paul enjoyed smoking cigars and drinking sangria together and created their famous “Pappas Sangria” which was enjoyed at many parties and events. In 2012 they welcomed their son into the world! Their “lucky charm” filled their hearts with so much love and Aubrey was an incredible mom who took so much pride in caring for her son. Aubrey and Paul were incredibly excited to expand their family as they had recently announced their second pregnancy shortly before her passing. At the time of her death in October 2014, Aubrey was pregnant with her second child due in March 2015.

She loved cooking and learning new recipes and was passionate about nutrition, fitness and health. She loved Enrique Iglesias and was the dancing queen at every event she went to. Aubrey was an avid New York Giants and New York Yankees fan and even had a life size cardboard cutout of Derek Jeter in her classroom! Stunningly beautiful and popular throughout her life, she was also well-grounded, level headed and remarkably intelligent with an amazing heart and a one of a kind personality that led her to being friends with everyone. Her smile and laugh lit up a room and the hearts of all of those who knew and loved her.

On October 8, 2014, Aubrey and her unborn son, Nicholas “Niko” Pappas, died in a tragic car accident in South Brunswick, NJ. Many people throughout various communities felt the impact of this unfathomable tragedy. Shortly after her passing, Paul found a list in Aubrey’s nightstand that stated the things she wished to achieve in life, her “bucket list”. Paul, family members and friends vowed to help Aubrey complete the list and to continue to “live like Aubrey” and thus The Aubrey Foundation was born. 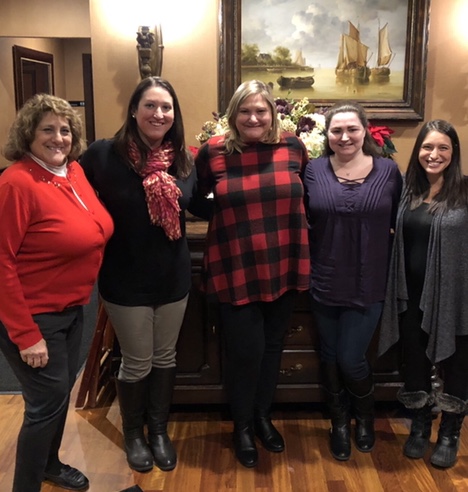 Aubrey is a light, a guiding force and an inspiration. Aubrey is my cousin but she also was a wonderful teacher and mentor, and my go-to MaMa when I had my son. After her passing my sister, cousin and I founded this organization to continue her mission. I have been humbled by the response from the community and so honored to be a part of it. It is my hope that as this organization grows we continue to be her light, a guiding positive force, and an inspiration for others as we all #LiveLikeAubrey.

When I met Aubrey, I instantly came to know her beautiful personality, her infectious smile, and her ambitious drive. She lived life to its fullest with her family, friends, and even her students. She always exhibited such a positive light to others, which has become more and more evident through the stories told. I love hearing stories of her in the classroom especially stories of her compassion & understanding- which truly inspires me as an educator to always strive to reach every student that walks through the classroom door. Being apart of the TAF family & community, has been a humbling experience watching others continue to #livelikeaubrey.

Aubrey was a friend, a mentor, a teacher, a cousin.  She was laughter, love, strength,  ambition, support and beauty. Above all, she was a positive influence to so many lives. She embodied confidence, kindness and acceptance of others. These beautiful traits were Aubrey’s attributes which I feel must be lived through as many people as possible. This foundation allows me to keep Aubrey’s energy fluid by bringing others together and giving back to the community & students of North Brunswick, which Aubrey was so deeply invested in. To me, the best part about being involved in TAF is connecting to others: continuing to hear the amazing stories about how Aubrey touched lives in such personal and special ways and working alongside the network we have created of old and new friends who are deeply devoted to collectively continue to positively influence lives in Aubrey’s name.

I became involved with the Aubrey Foundation when I found out that plans were in the works for a “Purple for Pappas 5K” fund-raiser over eight years ago. My enthusiasm for volunteering was two-fold: I had experience coordinating other successful 5K races, and it was a way for me to “give back” for the way that Aubrey touched our family. My son, Harrison, was a 6th grade Honors English student in Aubrey’s class in 2006-07. He learned how to express himself creatively, and was inspired to step up and be a leader at many levels in middle and high school. He continued to “live like Aubrey” by volunteering with many community and charitable events in Hoboken, where he attended Stevens Institute of Technology, managing leadership roles in baseball and his fraternity, and continually seeking ways to help others. Today, he is a successful and generous young man, who still looks for ways to make the world a better place.  It brings a smile to my heart when I see him wearing his purple “Live Like Aubrey” bracelet every day, and I'm so proud that he has joined the General Board of TAF.

I met Aubrey through my husband, John. Aubrey and John taught together at Linwood Middle School for many years. Aubrey and I had many similar interests including our love for the NY Yankees and above all, our love for our children. As a first time mother, I often turned to Aubrey for advice on motherhood. She was always there to lend a listening ear and to answer any of my questions. As soon as the Foundation was developed, I knew that I wanted to be involved. Aubrey was very special to my family. As a member of the foundation, I hope to give back to others just as Aubrey did. 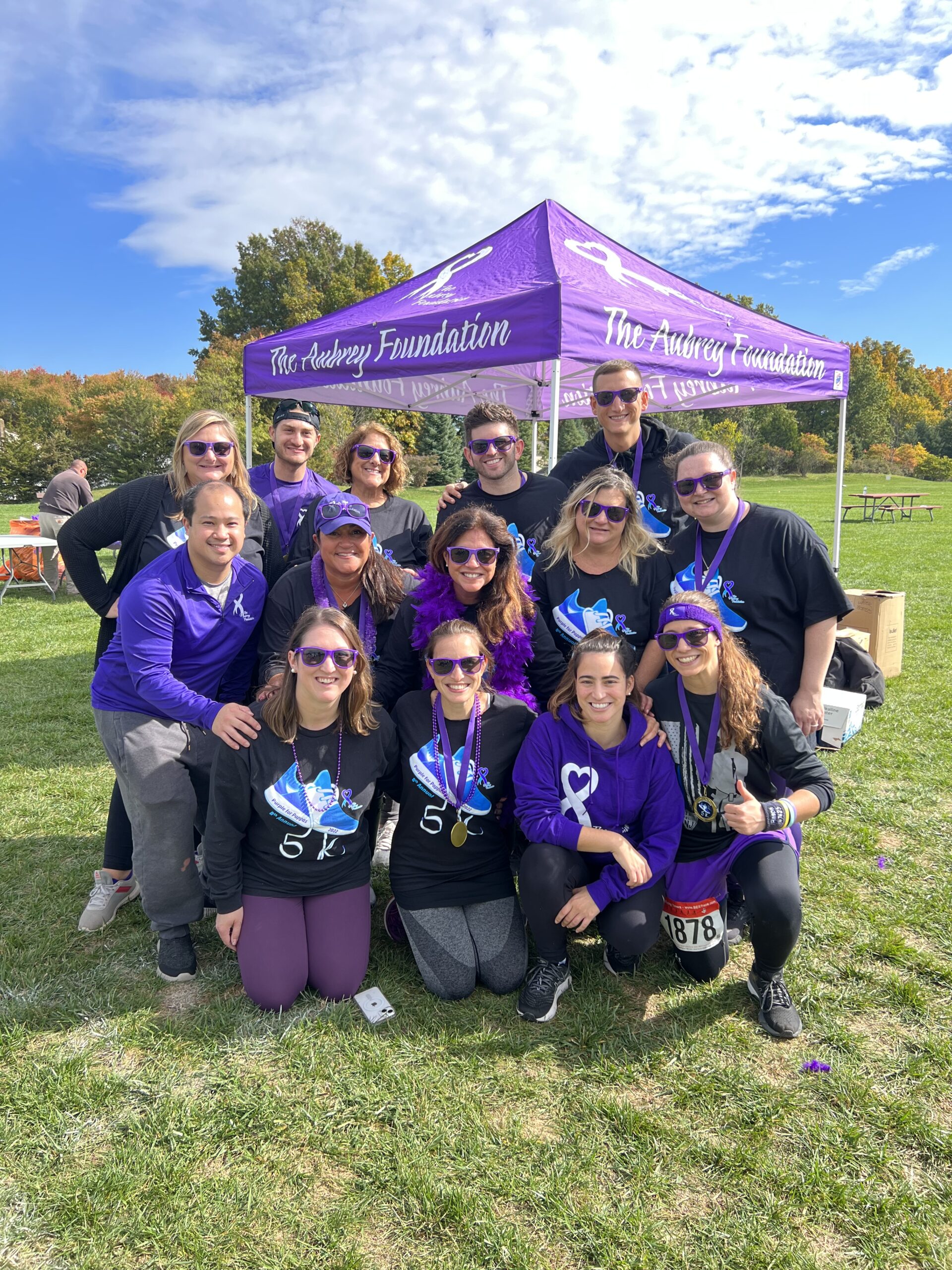 I met Aubrey years ago and was instantly drawn to her personality.  She was unbelievably welcoming and a ton of fun to be around.  She was bubbly, genuine, and always willing to help.  When Aubrey passed away, it seemed crazy that so much of the world wouldn’t get to experience just how wonderful she was.  It was that feeling that made me want to join The Aubrey Foundation and make sure Aubrey’s light and legacy continues to reach people even when she is no longer here.

My involvement with The Aubrey Foundation came about when I designed their first fundraising banner. Although, that first banner was looked at as a favor, I would then find myself designing flyers for additional events, especially the Purple for Pappas 5k, and various signs and pictures. Although I didn’t meet Aubrey personally, what inspires me to continue fulfilling this role within The Aubrey Foundation are the people who began it all and who continue to put forth their efforts towards its’ success. It is through each one of the board member’s stories and experiences that drive me to design each piece to the best of my abilities to represent Aubrey and the foundation that honors not only her name, but her as a person.

Aubrey is a cousin of mine through marriage, but anyone who knew the role she played (and continues to play) in my family would easily assume we were related by blood.  Other than looking somewhat similar to each other, we were very close.  I am extremely grateful for the love she shared and hope that I can emulate her personality and contagious good vibes for years to come.  The Aubrey Foundation has been both an outlet for me to work and act in her honor as well as a place where I've learned more about my own strengths!  This is deeply meaningful to me, because Aubrey was instrumental in building up my self-esteem during teen years.  My past experience with The Aubrey Foundation has ranged from volunteer, to Cigar Night committee member, to General Board Member.  You can usually find me with my "Aubrey ring" at any TAF event, and I'm thankful for the opportunity to continue to work in Aubrey's name.

I have known Aubrey since 2006 when we met at Linwood Middle School, and I became her co teacher in an inclusion Language Arts 6th grade class. We became fast friends. We taught together for many years, and made many amazing memories both inside and outside of school. Aubrey always taught me to live life to the fullest, and for that I am grateful. I named my daughter, Skyler Aubrey, after her and know her shining light will always look after my daughter and family.

Aubrey Pappas was so many incredible things in one. Among them, and probably above all, she largely impacted my life by influencing me with her positive, driven attitude and “nothing can stop me” mindset. Though her life was cut short, Aubrey made each day count and never took a moment with family, friends, students, coworkers, for granted. Unfortunately, Aubrey isn’t here physically to share her kindness, confidence, and laughter anymore, but this foundation keeps her spirit alive. Being a part of this foundation gives me an opportunity to grow in teamwork and communication skills, while spreading the influence Aubrey left on me to those who never got the chance to meet her.

I met Aubrey in 2006 when I had her as a teacher at Linwood Middle School, so to me she was Ms. Fadule. Aubrey was always a shining light in my school day, bringing unmatched enthusiasm to our class day in and day out. As a baseball fan, one of my fondest memories of Aubrey is joking about the life-size cutout of Derek Jeter in her classroom. When I heard of her passing I was devastated, knowing that future students were deprived of the incredible experience I had being her student. I strive to #LiveLikeAubrey every day which can be as simple as trying to make someone smile, something she provided for me countless times. I joined the 5K committee in 2021 and am looking forward to contributing to the General Board in 2022 and beyond.

We are always looking to expand our family. If you have been inspired just as we are and want to contribute to our mission then you can learn about our opportunities.